Show me a little bit of your dance

Can you show me a little bit of what your dance is like? This question, posed once by the French choreographer Jerome Bel to the Thai dancer Pichet Klunchun, then vice versa, is the base of the piece “Pichet Klunchun and Myself”  by Bel. The two performers sit on chairs profile to the audience, facing each other, Bel with pen and paper in hand, when asking Klunchun to present first himself and then elements of Khon dance. Klunchun, dressed all in black and barefoot, rises his foot and stamps loudly, presents arm movements, explaining the differences between the port de bras of the four main characters 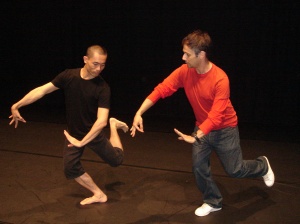 when being asked by Bel. While watching, Bel often frowns, looks and asks naively as a child, sceptically. Together with Bel, the audience learns about how to show grief and death on a Thai stage, walking slowly and drawing tears on the face with the finger. The spectators are shown how to distinguish between prince and princess and how the feeling „relaxed“ is presented through a headmovement forming an eight. Bel asks the questions we would probably pose ourselves. Playfully, Klunchun includes Bel into his presentation when having him being the one to die when Klunchun shoots an arrow in his direction.

After an hour, the vice-versa-version starts. Now it is Klunchun´s turn to question, what are strong elements of Bel´s performances. When Bel shows him as scene in which he does not do more than looking at the audience, Klunchun openly expresses his disappointment. Bel goes on describing that he does not want to represent something on stage, but to show the audience reality. When then showing death on stage in his interpretation, Bel does karaoke with „Kiling me softly“ and finally drops on the floor. To this, he can relate, says Klunchun, when telling about his mother dying softly.

Throughout the piece, Bel and Klunchun also aim to point out the differences in their cultures, finding very little parallels like the role of the king in the development of the dance, but huge opposite opinion as on getting married before having a child. Still, most of the time is dedicated to exploring and trying to understand the other´s style.

Tags: Critend 2010, Jérôme Bel, Pichet Klunchun and Myself
From: English, Inceleme / Review, Theresa Steininger
← a review i wrote 5 years ago on bel/ klunchun
An Essay on Invisibility →
No comments yet