Is there music in the silence between two notes? Can emptiness have a rhythm, a direction, a meaning? John Cage is exploring just that gray area of voices and images blinking out of existence in his piece Lecture on Nothing – a verbal narrative by a single voice, drifting with the flow of free association. Dancer and choreographer Eszter Salamon recreates the same void by using a non-expressive movement material and welding it all in a never ending cycle of repetition.

The performer is alone on stage, with the seats arranged around the arena. There is no primary direction or focal point the movement can refer to; moves come and pass as freely as ideas on the Cage recording. We hear the words through Salamon’s voice: she re-iterates the text as she hears it on her headphones. Words (thoughts in her head by Cage), interpretation (her own voice echoing the thoughts) and the changes of breathing become one as if we were witnessing a meditation of some kind, an experiment to soothe the ever so loud ego and lull it into sleep by the rhythmic repetition of ideas and movement. ‘I get the feeling that more and more… we are getting nowhere’, Cage-Salamon is saying and there is no end to this multi dimensional meander: even when the dancer stops to drink a glass of water (Cage is doing the same on the recording), she moves on; she swings her hands, bends, experiments with a sequence until it wears out and changes into something else by the movement’s own weight. 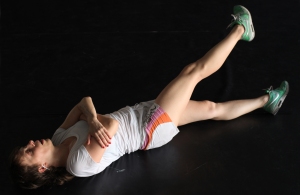 The road to Nowhere is of course paved not with randomness but pure Structure: structure in the text and in the movement material Salamon uses to make her point (which of course is not to make one). The performance ends as is starts: with the performer’s own words, but this time we can ask questions. The piece opens a new level of dialogue between music (ideas), dance (physicality) and our own reflection and response. We are on a path that spirals upwards in terms of acceptance and understanding. As Cage repeats several times over: the problem is not when you have to be somewhere, but when you want to be somewhere else – referring to the complementary notions of rejection and awareness, the mind’s exaggeration of pain and pleasure. Like they say, we have to lose ourselves to be found – to be saved, to transcend. Silence seems like a path to salvation, a road open and waiting.

Tags: Critend 2010, Dance for Nothing, Eszter Salamon
From: English, Inceleme / Review, Nóra Bükki Gálla
← Veiled Identities Here is an important article and a good critic example: http://lmsi.net/In-another-life
Some Open Source Criteria for Critenders →
No comments yet