Looking for the stranger

In Me and My Stranger the belgium performer and theatre-maker Sarah Vanhee is exploring the notion of the stranger. Her lecture performance is strongly related to the French philosopher Jean-Luc Nancy and his novel L’intrus. In one hour Vanhee presents a collage of film excerpts, street interviews and recitations of different texts that are somehow connected with the phenomenon. She for instance refers to the German political theorist Hannah Arendt, shows parts of Pasolini’s film Teorema and parts of Claire Denis’ documentary about Jean-Luc Nancy called Vers Nancy. Vanhee also traces an ark to the current political situation in Belgium and appeals to the highly problematic issue of immigration. Moreover she includes scientific, microbiological descriptions in her lecture by talking about the human immune system being assaulted by something strange. 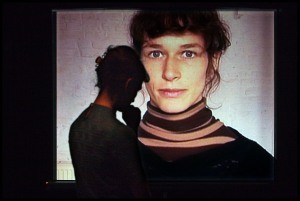 Vanhee is dressed casually – blue jeans, sport-shoes and a light blue shirt. By speaking about herself in the third person she tries to create a sort of alienation, as if she was able to see herself from the outside. Also the change between speaking in front of the microphone and speaking next to it (without amplification) creates a constant shifting relationship towards herself and the audience. A strong moment appears when she confronts herself with her own video image. That’s the only moment when she actually speaks about her own thoughts concerning who a/the stranger is and why she sometimes feels like a stranger. But the moment is too short to be convincing.

The calm, natural, very personal way, how Vanhee is dealing with the philosophical question, is a strength of the performance. But the format of presentation as well as the very loose mixture of numerous different perspectives/references is leading to nowhere. She makes all this connections (which at some points run a risk to be inappropriate), but she does not create something “more” out of it. In consequence of this very clear structure, the space for the spectator is quite limited. The lecture performance ends with a final speech accompanied by soft music with the following words addressed to the stranger: “you remain a mystery”
– and that’s also true for the performance.

Tags: Critend 2010, Me and My Stranger, Sarah Vanhee
From: English, Inceleme / Review, Martina Rösler
← Body Architecture
One Too Many →
No comments yet